How can I recreate the Darwin Project’s Particle?

This is what I came up with after an hour of playing around. It doesn’t look exactly like the effect from the video, but it’s a start which could easily be tweaked to get pretty close (seen from the side, not from below):

I did this by creating a VFX graph and controlling some of its parameters with a timeline.

Let’s first look at my VFX graph. First the “Spawn” and “Initialization” sections: 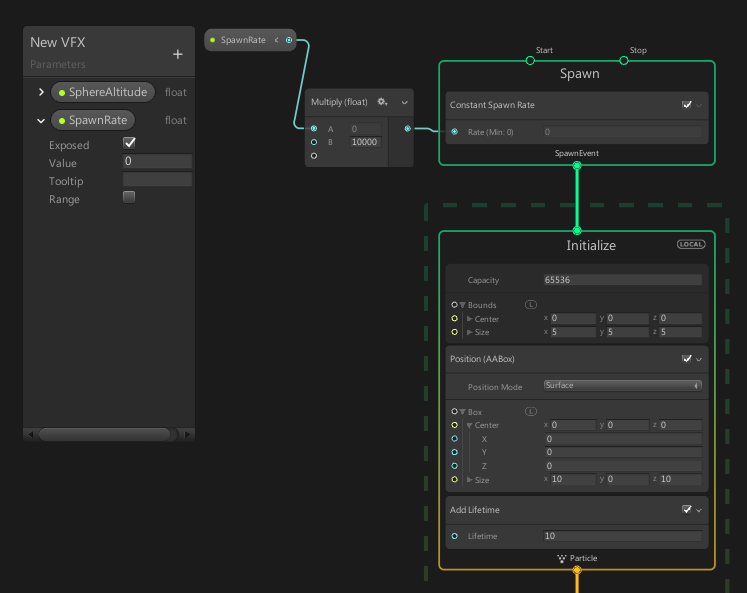 The initialization node spawns the particles in an AABox with a height of 0 – or in other words a rectangular plane aligned to the floor. The spawn rate is controlled by a parameter. I am multiplying the parameter by a constant, so I can have that parameter in a handy range between 0 and 1 in the timeline while I can control the general density through that multiplication factor.

The parameter has the Exposed checkmark enabled. This is important, because it makes it possible to control that value from something outside of the particle effect, like a C# script or like in this case a timeline asset.

Now for the Update section: 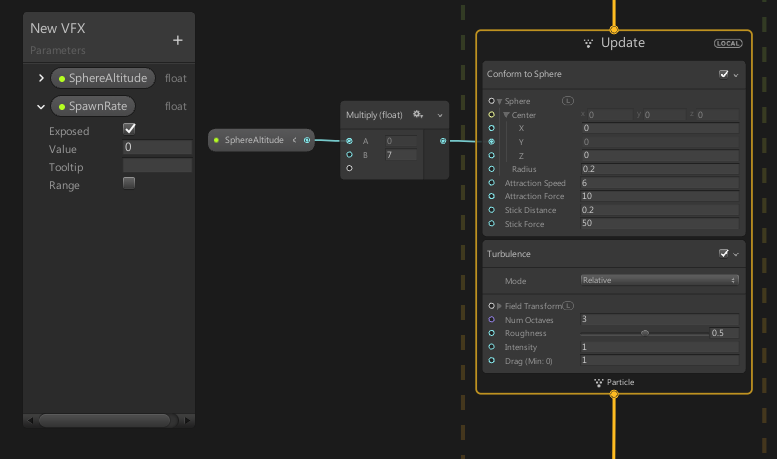 The update-node is based on “Conforms to Sphere”. This causes all the spawned particles to get “sucked into” a spherical shape. The height of the sphere is the second parameter I exposed. I again used a multiplication node for better control over the maximum height without having to fiddle with it in the timeline.

I also added a dash of turbulence for flavor (to make the whole particle field look a bit more random).

A screenshot of my output-node isn’t worth inlining. It’s almost unchanged from the official template, just with the color changed from yellow/orange to cyan/blue.

Now for the interesting part:

I created a timeline-asset for my particle effect. Then I added the two parameters of my VFX to the timeline:

Here I set the spawn rate to only spawn particles during the first 5 seconds, with its peak at 2.5 seconds.

The altitude of the sphere is set to slowly raise over the first 5 seconds, then smash down in a parabolic curve.

What you could do next is make the sphere explode after it reached the ground position. You can simply do that by adding another parameter which controls the attraction force and stick force of the “Conforms to Sphere” node and adding it to the timeline. Set that curve to quickly switch from positive to negative the moment the sphere hits the ground. This should cause the particle cloud to explode.

I am looking forward to seeing some awesome particle effects in your game.

I tweaked the effect a bit more and added the explosion effect as described above. I also added a floor collider to make sure none of the particles from the explosion go to waste. The floor collider is controlled by a bool variable and is only active during the second phase so it doesn’t get in the way of the spawned particles.

Here is the asset pack with the VFXGraph, timeline and a prefab which combines them.