How do I integrate drag over distance?

Only in exceptional circumstances will players notice or care about the accuracy of your physics simulation. Most games fake calculations like these, which has several advantages; fake calculations are easier to code, computationally less expensive and most importantly, they allow the behaviour of the game to be tweaked in favour of fun rather than realism. If playtesting reveals physically accurate bullet drag is less appealing than some other model, faking it becomes a deliberate design choice.

If you still believe realistic drag is an important feature for your game, here’s a bit of physics. The drag equation can be solved analytically, though if you should want to involve other forces on the bullet, you require numerical integration. Combining the drag equation with Newton’s second law of motion, we get: m v'(t) = -½ v(t)² ρ A Cd, the solution of which is: v(t)=2 m / (ρ A Cd t + 2 m v(0)-1). 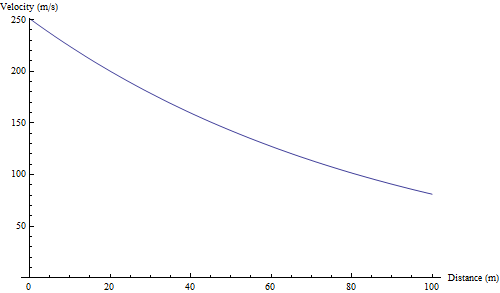 The equation works reasonably well for bullets of different sizes, shapes and masses, but not for different materials. Wood, kevlar and flesh are not fluids and the drag equation does not apply. Newton’s approximation of impact depth may be of some use, but its accuracy is limited, especially for materials like kevlar, which are designed to outperform this approximation.

You don’t need to integrate for this.

What you have calculated above is the amount of energy that’s scrubbed off per second.

The math for this can be done as one line if you build the equation for it.