Using collision.contacts to determine if on a floor

I’m assuming you’re referring to the player being detected as touching the ground, and not every object?
Regardless; simply place a collider on your floor.

Then add the following script to your floor.

(You can equally use OnCollisionStay to have only one of these, however, it means the script has to check every fraction of a second as opposed to only when the event is called, so it ends up being less efficient.)

Also, the script I am referring to as “myCharacterScript” is simply whatever script you have on your player which is meant to hold whether he/she is touching the floor or not. That script (regardless of whatever else it holds) must have a boolean value “isOnFloor”.

Then you can do whatever you want with detecting it. E.g.

Let’s assume your player is using an upright capsule as a collider, or otherwise has a sphere shape at the bottom of their collision representation (this can help avoid little snags from small ridges in the level geometry, and has a more intuitive behaviour when going up ramps, rather than cantilevering off them as a box collider would.

Let radius be the radius of this spherical/capsule end, and assume it’s centered on the player’s vertical axis (collider’s local x & z = 0)

This uses the fact that the steeper a flat surface is, the further out on the collider it will make contact – from directly in the center for a perfectly horizontal surface, to all the way out at the perimeter for surfaces approaching vertical. 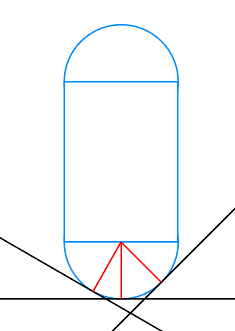 If you only have the one collider, you can instead check that contact.normal.y >= Math.Cos(maxIncline * Mathf.Deg2Rad). Here I’m doing a position-based check just in case you might hit an object with multiple colliders – like a gun barrel or an object you’re carrying – so even if the normal is upright it’s not mis-detected as a floor you’re standing on.